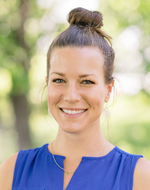 Brianna is a graduate of the College of St. Benedict. She was principal cellist in the CSB/SJU Orchestra from 2009–10, and performed with the ensemble for four years under the direction of David Arnott. Brianna studied cello with Lucia Magney as an undergraduate student, as well as piano – her first instrument since the age of four – with Dr. Jim Dennihan.

Brianna has been a part of various chamber ensembles, performing in the Twin Cities, St. Cloud, and Brainerd Lakes areas on both piano and cello. Most notably, she has performed with the Minnesota Ballet, the Lakes Area Music Festival, and the Legacy Chorale of Greater Minnesota. She has played professionally for weddings and other events since the age of 13 and is an active liturgical musician.

Brianna currently resides in Minneapolis, loves running, doing yoga, and dancing with Project Sabor, an all-women Latin, hip-hop fusion dance team. She is a 2nd-grade teacher at a Spanish immersion school in Minneapolis, and runs an after-school program, Focus for Success, that helps kids improve their focus and concentration.